Most of my adult life I’ve remained obstinately unaware of the unequal roles of men and women in the music industry and elsewhere. Denial? In hindsight, maybe it’s been a case of “don’t look down.” On a high and dangerous ledge it’s best not to think about the environment but to just get on with the task. Over the years I’ve been obliged to share bills with some wildly incompatible acts as an example of “Strong Women in Music” but never actively sought that role. All I ever wanted to do – and this hasn’t changed – is make music.

In mid-seventies Liverpool, I’d just about heard of the Runaways. The only female musicians I actually knew were the Women’s Lib posse in my neighbourhood, with their limp and tedious 12-bar strums about male chauvinism. It was SO much more fun to hang out with the boys, playing loud, loud, loud and practising aggressive downstrokes till my wrist ached. Which led me to co-found the Accelerators, playing rhythm guitar, as punk rock hit the Northwest. 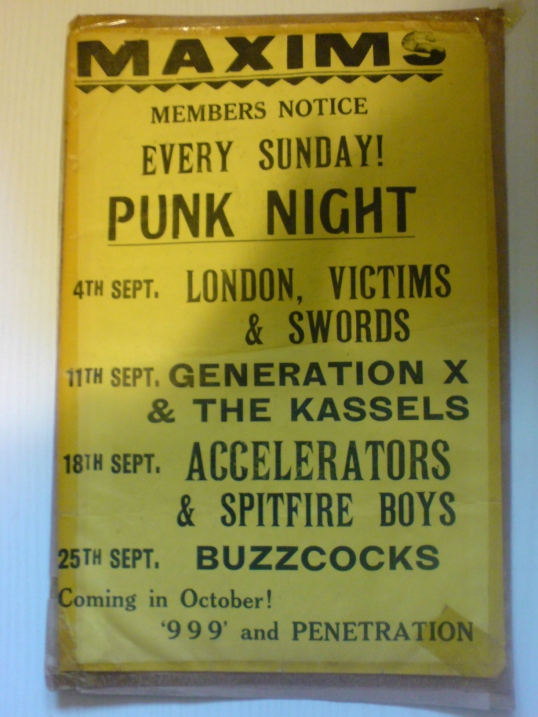 Women were getting a raw deal in those days, and I was stuck in an abusive relationship with the other guitarist, He’d slapped me across the face after a show for the unpardonable sin of losing his cable when packing up (and by the way, I don’t know to this day why I was responsible for his fucking cable) No friendly caring helplines and forums back then, dear reader. Yet It never even crossed my mind to quit the band. It was heaven, hell and dysfunctional family to me. I put another steel layer round my heart and got on with it.

The rush I got from hitting that stage as a team to play blazing rock n roll – coupled with the adventure of ceaselessly travelling the country in mechanically unsound vans and supporting the likes of XTC and the Buzzcocks – outweighed everything else. Sadly it also blinded me to what was going on in the wider music scene. Procuring and playing gigs was my life mission, and while the likes of the Slits and Siouxsie Sioux were busy rewriting female musical history I was probably shovelling coins into a payphone to talk to some dodgy pub landlord or helping load a PA into a van.

With their dogged policy of taking the opposite standpoint to everyone else whenever humanly possible, the Accelerators were deemed to be far from politically correct. We had a serious run-in with “The Feminists” who even picketed a show we were due to play*

To quote the band Magazine, I was shot by both sides.

*full account in No More Heroes, complete history of UK Punk from 1976 to1980 by Alex Ogg, extract viewable at www.kathy-freeman.de

Fast forward to the late eighties – once again I was the only girl in the band. This time it was volume eleven grunge rockers,The Birdhouse. Again my focus was on the playing – I didn’t want to think about sexual politics bla bla bla. But while they were generally respectful to me, the locker room banter of one or two of the band and male crew was anything but respectful to womankind.

Female band followers were generally referred to as “it”, not “she.” There were the crude remarks about the singer’s own unfortunate girlfriend who had “an arse the size of the moon” When, as the band was hanging out in some dingy Midlands aftershow room, the comment…”woah I’d like to give that a pearl necklace”…drifted across the room something snapped. I hurled my handbag at the floor (not the stuff of Amazon legend, but an effective conversation-stopper) and screamed at them to shut the f*** up. Lo and behold, by the next day the worst offenders had come separately to me with shamefaced apologies, each referring to the “alter-ego” mode that comes with being on the road. A kind of Jekyll and Hyde mentality which incidentally also excused them for not showering for five days on the run.

My time in The Birdhouse was up when they decided to become the next Guns and Roses (only to disappear swiftly into pre-internet oblivion) But the experience was duly processed into a song “Here Come the Boys” which I performed in my nineties punk-metal band Joyryde. This time fronted by women. “Strong Women” if you insist.

3 responses to “The Girl in the Band”