If reincarnation is true, can I come back as Viola Smith?  She seems to be having more fun with two sticks than I’ve ever had with six strings

If I was married to a guitar, drums would be my bit on the side….no – that sounds kind of weird, let’s try again.  Rehearsing with various bands during my long musical journey, there was always something highly seductive emanating from the unattended drum kit every time the drummer left the room. It would whisper “come on, hit me, you know you want to!”  But I was scared of either being torn off a strip by its owner for unauthorised use, or of sounding like a grade A non-drumming idiot. Or both.

One day in ’98 the affable and tolerant Stef X, (who drummed for a couple of years with Joyryde) offered me his drumstool during a rehearsal break and I had a proper go.  While I’d never played before, I had a thousand patterns stored from music I’d absorbed, and years of rhythm guitar-playing must have taught me something about timing. He was duly impressed by my not-too-badness on the first attempt. Soon the challenge of getting round a drumkit would become a welcome diversion from trying to be a rock’n’roll frontwoman (which then was more about hustling venues and labels than playing the goddamn songs)

By some God-must-have-planned-it coincidence, a work colleague was vacating his flat that week  and couldn’t take his drumkit (which up to that point I’d never even known he possessed) A Hayman kick drum, snare, floor tom, two toms,  a  rickety hi-hat stand and a few cracked cymbals were mine for a mere 100 quid a few days later. My miniature drumming oddysey had begun…….watch this space, more to come! 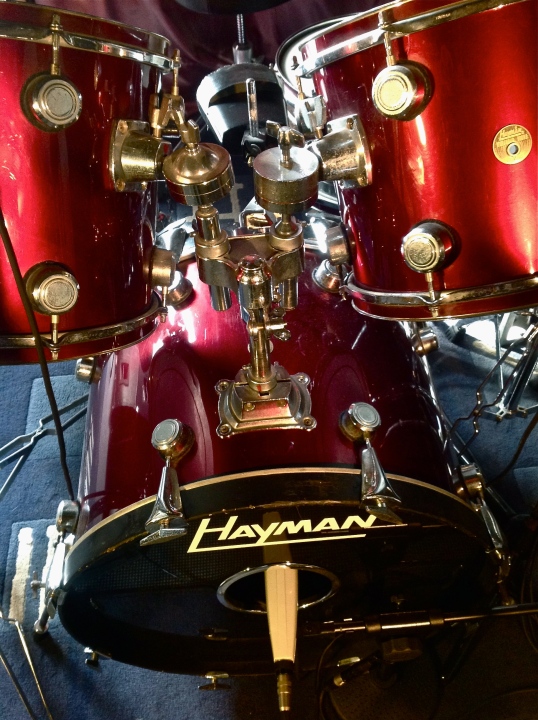 The Red Beastie – in service today as a studio kit 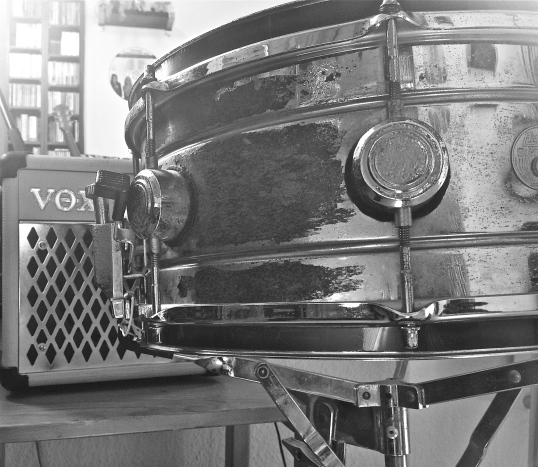 You can check out my songs (but not my drumming!)  on BANDCAMP

More about me at KATHY-FREEMAN.DE

I announced my big plan to make a home-recorded album to most people I know. Not to mention posting a blog about it in January. So…. No Going Back! Going forwards is more complex than making a big mission statement, so when my heroic but nebulous idea had morphed into a list of  do-able tracks, I felt relieved.

When other musicians said yes, they’d help out, I felt more relieved.

When we rehearsed the rockier tracks  (rockier as in “more rock’n’roll!” ) with drummer Tom Peterson,  and it sounded okay. I was borderline ecstatic 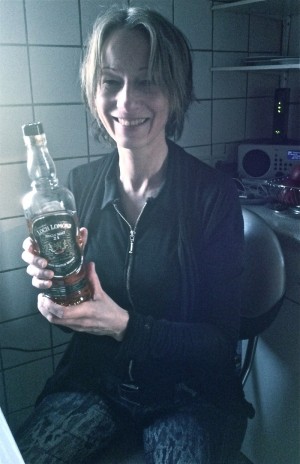 loosening up during a pre-production rehearsal

Now I’m down from the high and trying to remember all that  “what vocals where? which guitar when? which take and why?”  kind of stuff. My half-created tracks are like 14 or 15 little babies all clamouring for attention…..at least two will get thrown out of the pram before I’m done but I don’t know which yet. The loudest ones are getting too much attention. The quieter ones need feeding with fresh inspiration. 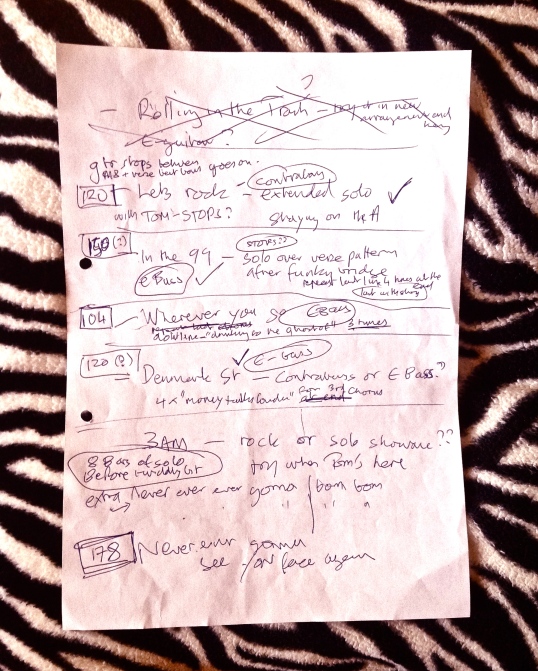 For twice as many tracks as Tom, in fits and starts during whatever spare time I can brutally squeeze from our chaotic schedules.

Then I’ll lay down all the guitar and vocals that didn’t cut it the first time round.

And then I’ll lay down. Period.

To be continued. In the meantime: a solo demo version of one potential track